An Evening of Cheese and Wine

I know nothing about wine (apart from enjoying it), am allergic to cheese, and don’t bank with Coutts, but the invitation to the Bank’s cheese and wine evening yesterday to celebrate the first anniversary of the opening of their Reading branch, was very welcome anyway. Especially as it came from Anna, who works at Coutts as a private bankers assistant. Anna also happens to be the person I’ve painted more than anyone else – four miniatures, one pencil drawing, and a large watercolour, (with the words to the song ‘Young and Beautiful’ appearing in the background). Anna also featured on one of my Christmas cards a couple of years ago. 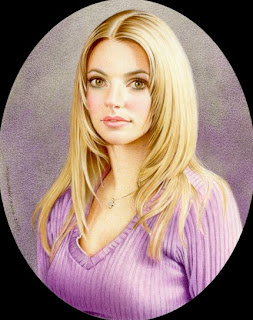 A miniature portrait of Anna
The party was so warm and friendly and to listen to the cheese expert flamboyantly extolling the virtues of the dozens of very interesting looking cheeses on display, was most entertaining. Jilly came with me – and did all the driving - on a very rainy and dark evening in Reading's rush hour. We met a man there who mentioned that he wanted to buy a painting of one of his ancestors he’d discovered in an auction house, but the price - in excess of a million pounds - was a bit too much. His family has lived in the same house for hundreds of years and has a collection of miniature portraits dating right back to Nicholas Hilliard in the late sixteenth century. He’s invited me to see his collection sometime – so I’ll look forward to that. 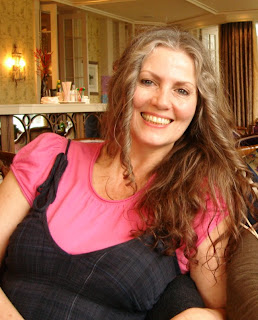 I had lunch with another of my ‘models’ at the beginning of the week. Jane is the daughter of Mollie – my second cousin once removed. So does that make Jane twice removed? Mollie was going back home to New Zealand on Tuesday evening, so I took them both out to lunch at Phyllis Court to say goodbye. Jane was Miss New Zealand about thirty years ago, and as you can see from the photograph I took at lunch, looks quite ravishing. I’m trying to encourage her to write her autobiography, as she’s had a most amazing life. She features in mine. (Click here.)
And on to dinner with Paul and Debbie on Wednesday. (Yes I’ve painted both of them too!) They’d invited me to join them and Nancy - Paul’s 92-year-old mother - that evening in Denham. Now there’s a lively character! She’s bought and wrapped all her Christmas presents. They were stacked in big coloured sacks ready for Santa’s collection no doubt. We had a wonderful feast at a lovely little restaurant nearby. Paul and Debbie are off to Bridlington soon to star in the pantomime Cinderella. Paul will play Baron Hardup and Debbie the Fairy Godmother. I saw them last Christmas – they really are good and obviously love playing panto. Wish I could go this year but the ten-hour return drive is a little too far. (It opens on 15th December at the Spa Theatre in Bridlington and runs until January 4th.)

What price hurt feelings? I just cannot understand how our industrial tribunal system arrives at the obscene and exorbitant figures given out these days in compensation. Don’t get me wrong – for any serviceman or woman injured in battle, the sky’s the limit, as far as I’m concerned. But when a self-styled lesbian soldier is given the sum of £200,000 for ‘hurt feelings’ because she was ‘pestered for sex’ by her boss, I despair. Compare this amount with the Marine who had both an arm and a leg blown off by a landmine while on active service in Afghanistan. He was awarded £161,000. Or the Corporal who lost both legs and an arm in a mine explosion. He was given £214,000. Just how can his massive injuries, which will seriously blight the rest of his life, compare with ‘hurt feelings’? And how does the brave Captain Kate Philp feel as she lies in her hospital bed after having her left leg amputated below the knee as a result of injuries she received in Afghanistan earlier this month? Who are these people who make these ludicrous decisions with someone else’s money?

I’ve started writing my new book on the subject of the technique of miniature portrait painting. It’s going to take a long time, as I must aim it at both the professional and amateur artist. This will be my last book on the subject of miniatures, and surely the most comprehensive. Apart from detailed illustrated sections on how to go about painting these tiny portraits, I’ll include a double-page spread from the world’s leading painters of silhouettes, oil, and enamel portraits. Now I must have a blitz in my living room to prepare for the arrival of a new big television set.

And if anyone wants to ‘pester me for sex’ I promise I won’t ask for a penny in compensation!