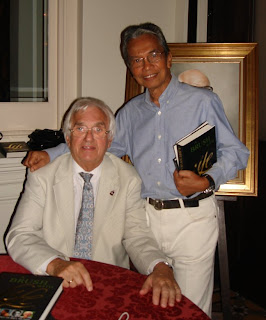 Tan Siok Sun and I collected the large oil portrait of Tan Sri Dr Tan Chin Tuan from his house yesterday afternoon on our way to the Bar and Billiards Room in the Raffles Hotel – venue of the launch of my autobiography later that evening. We arranged about twenty-five of my paintings around the room, the four biggest on easels in the corners. The Raffles Hotel had arranged for a technician to install a large screen and all the other equipment needed for me to give my PowerPoint presentation. (I’d entitled it ‘My Life in Painting.’ Click here for details)
Over 50 people arrived for the launch and cocktail party around 6 o’clock. Jennie Chua, the former Chief Executive of the Raffles Hotel, performed the opening ceremony as guest of honour, with Siok Sun giving a very witty speech - even managing to couple Barack Obama’s “Yes you can” famous slogan with my future ‘How to Paint Miniatures’ publication.
Pictures of me as a young boy on the screen drew hoots of laughter – I’ve no idea why - although I did look a bit of a geek, or young fop as Paul Daniels would say. But the short film sequence I played from ‘Love is a Many Splendored Thing’ (The reason I came to Singapore in the first place) caused large sighs of appreciation from the audience. The cream of Singapore mingled with several of my old friends, some of whom I hadn’t seen for 30 years. (Shamsuddin for example, in the photograph above, was a brilliant artist who worked with me in the early sixties - he's now 75 - doesn't time fly?) 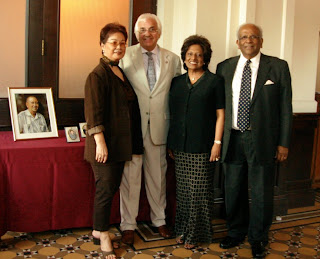 Suzanna, me, Jayanti and Allen Pathmarajah 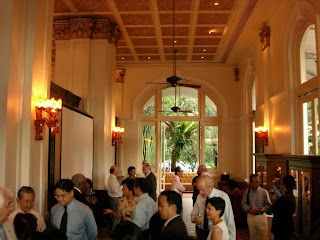 Overview of the Bar and Billiards Room 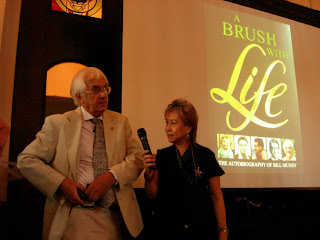 Changing mikes with Siok Sun at the book launch
Yesterday I had lunch at the Tavern with Bob Seymour. Bob now lives in Kuala Lumpur and Perth with his wife Hanim. Bob used to be the MD of our office in KL when I was Regional Director for Grant Advertising in the seventies. He told me an interesting story. When the office was having a bit of a downturn a few years ago, his Malaysian colleagues called in the Feng Shui man to sort it out. He advised that a tiger facing the building needed to be shot, so a small bow and arrow was erected in the office with the aim of neutralising the problem. (Don’t ask.) The weirdest thing of all, however, was that Bob, being the Chief Executive, was required to fully immerse himself in a bath of coconut milk! Apparently that did the trick. (But I wonder whether his staff gleefully got together next day and said, “Guess what we made our MD do yesterday? Gullible idiot actually had a bath in coconut milk!”)
It reminded me of the time when I lived in Thailand and two of our top young executives were killed in a bus crash. Because I was their boss I took precedence, even over their parents, at the cremation. I was the first person (heading a hundred-strong procession of mourners) to set fire to their bodies with long tapers and lotus stalks. At the very end of the ceremony I was made to hold my thumbs together while lustral (holy) water was poured over them. This signified the exact moment when Tachapong and Amnat ascended to heaven.