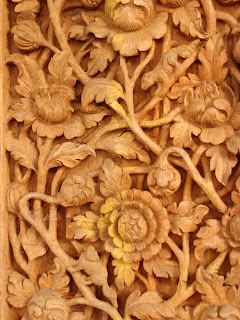 The new Bangkok Airport is huge, and as the Singapore Airlines counter is at the exact opposite end of the airport to the Eva Air counter, I’ve had the most exhilarating twenty-five minute walk - having just arrived here in Thailand in transit to London. How I hate getting up at sparrows fart in the morning! But now I’m sitting comfortably in the Evergreen Lounge.
My last day in Singapore was nice and peaceful. I popped down to Bras Basar Road to pick up the Chinese chop for my friend. (Hope he appreciates it.) When I asked why it was so much more expensive than those in Chinatown - especially as they had carved animal figures mounted on the top, she merely said “better stone.” As if it matters! 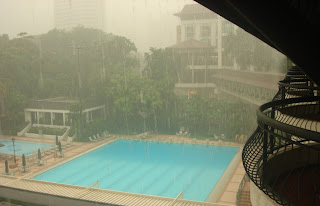 View from ny balcony in the rain
I’ve talked earlier about the brand spanking new sports centre at the Tanglin Club. So as a farewell treat I booked a couple of hours in the spa in the afternoon. (On the way I popped into the Billiards Room to say farewell to the pro.) Starting off with a defoliating scrub – I chose an Indonesian coffee flavour - it was followed by a very soothing massage. The soft tinkling music added to the fabulous ambiance and I relaxed almost to the point of falling asleep. 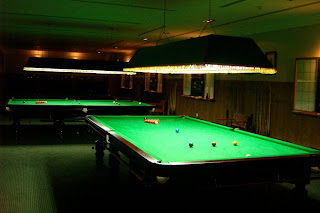 The Billiards Room at The Tanglin Club
I’d packed in the morning and written a few thank you letters, so when I came back from the spa (still in a state of Nirvana), did a quick change, and met Jack and Eileen Bygrave, who had invited me for an early dinner at the Mezzanine Lounge in the Hyatt – just a short walk away. It’s so nice to chatter away to friends you’ve known for so many years. I’ve known Jack and Eileen for more than 40 years – in fact we’ve lived in Singapore, Hong Kong, England and Bangkok just about at the same times.
Getting up at 5.30 this morning to catch the early flight is not my idea of fun, but now it’s time to say goodbye for a while to the heat and humidity (which I love) of Asia and back to dear old blighty. My Eva Air flight awaits me, but I think there’s just enough time to listen to The Archers on my laptop (I’d better turn the volume down low as I don’t expect everyone in this lounge are Archers fans!)