As this is my new blog, I thought I’d start somewhere near the beginning. Here I am as ‘Specky Four Eyes’ – just one of the names I was called at school. I’d already been painting and drawing for a number of years when this photograph was taken. Art had been my passion from the age of five when I drew my first portrait.

In the fifties I became a biscuit tin designer for Huntley and Palmers in Reading. This plate of biscuits was one of my early paintings. Difficult to do because each time I finished painting a biscuit, one of the other artists would steal it, till the plate ended up with just one biscuit remaining in it. 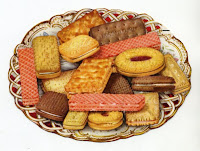 National Service days were spent in England and in Singapore, where I became a cartographer, and drew maps during the Malayan Emergency. My love for the Far East started there and then. 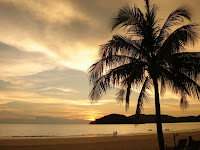 After demob, and a couple more years designing biscuit tins, I answered an ad entitled ‘Go East Adman!’ and returned to Singapore as the Creative Director for an advertising agency called Papineau. I bought a yellow bug-eyed Sprite, courted Miss Singapore, and joined the Singapore Motor Club.

Then I bought the fastest Sprite in Asia – and promptly crashed it during the practice run of the Singapore Grand Prix. 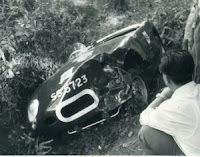 A few years later I went to Hong Kong and opened a package design division for my new company – Grant Advertising International, and months later was asked to ‘Pep up the art department’ in Bangkok. This I did, expecting to stay there for only a week or two. But fate decreed otherwise and I stayed on in Thailand for 7 years, initially as Creative Director, then a year later as Managing Director. Thailand in the 60’s was not the tourist Mecca it is today. Hardly any tourists. No jumbo jets, and no traffic jams. I loved it - especially the Thai people. 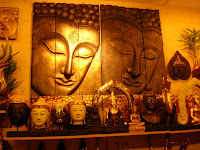 Then I was promoted to become the Area Director and relocated back to Singapore where I took over responsibility for all nine Grant offices within Asia. This caricature was drawn by one of our Chinese artists in Hong Kong.

Eight more years were spent in Singapore with constant travel around the region and throughout the world. It was at this time I took up miniature portrait painting (I could carry all my materials with me in a corner of my briefcase) Many Royal Palaces have collections of miniature portraits and it wasn’t long before I was summoned to meet the Sultan of Johor in Malaysia. There I was commissioned to paint a miniature of him as a young man. The Sultan was 80 when I first met him and I was soon dubbed ‘Court Painter to the Sultan’. 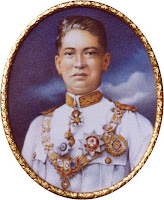 This was followed by many Royal commissions, and by the end of the 70’s, having had a miniature of the Sultan accepted for the Royal Academy’s Summer Exhibition, I felt the time had come to leave Asia and become a full-time artist in England. 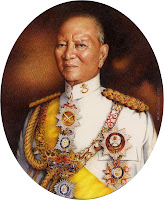 This I did, and although it was tough going at first to get established as an artist, my first lucky break was to win ‘The Exhibit of the Year’ award at the Royal Academy’s Summer Exhibition for this large still life painting entitled ‘Early Apples’. Subsequently I won the award again in 1982 for a portrait of my frame-maker in his workshop. Soon I was accepted a s a member of The Royal Society of Miniature Painters, The Miniature Artists of America, The Hilliard Society, The Miniature Art Society of Florida and the Society of Limners. (A Limner is the original name for a miniature portrait painter). 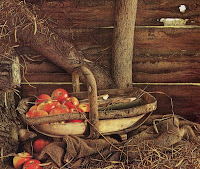 Since then, over the years, having won all the major awards for miniature painting, I also have painted full-size portraits – mainly in watercolour using a pointillist technique. Among the more interesting of my sitters have been Spike Milligan, The Duke of Edinburgh, King Bhumipol Aduladej of Thailand. Paul Daniels and Debbie McGee, Rolf Harris, Boris Johnson, Sir David-Money Coutts, and hundreds more. 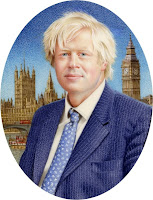 Recently I’ve published three books on miniature portrait painting, and just last month launched my autobiography ‘A BRUSH WITH LIFE’ at the Henley Literary Festival. Next month I will be launching it in Asia at the Raffles Hotel in Singapore. If you want to have a look at the book, follow this link, or to see a collection of my work, click on to my web-site http://www.billmundy.co.uk/

From now onwards, my blog will be a diary of my week. Hope you find it interesting. I’ll end this one by showing you the view from my studio window.