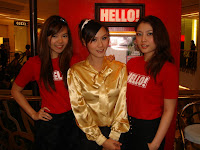 I arrived in Thailand yesterday afternoon and was driven straight to the Bangkok Hospital. Nothing wrong with me, but Maurice Bowra, my oldest friend, was languishing there after a 7-hour spinal operation. Poor chap, he’s been in agony for nearly a year, and tried to put it off until after my visit, but the pain became just too much, so he had the operation last week. Thankfully he’s now on the road to recovery and hopes to be home tomorrow.
The approach to the hospital resembles that of a very large, and very luxurious hotel. As you drive up to the entrance, a smartly uniformed man opens the car door for you and directs you to the King-size revolving doors, tidily banked on either side by about 30 or 40 leather wheelchairs. Three beautifully dressed pretty Thai girls wai (the Thai form of welcome) you on the way to the lift. There’s certainly no danger of catching any of the superbugs here - everywhere is sparkling, immaculate and dazzlingly white. Maurice’s large and wonderfully equipped room is on the top floor, where he and his wife Duangkamol (Oye) introduced me to his ever-smiling nurse. More wai’s. She’s permanently with him throughout the day. Another nurse takes over for the night. (When he goes back home the nurses will go with him and stay there for at least a week.) I had dinner with Maurice in his room – brought in and cooked by Pakdi, the housekeeper – before going home for a good night’s sleep. Even though it was a twelve-hour flight I rarely suffer jet lag. This photo is of Maurice and his nurse in the room. (I haven’t yet learned how to put captions under photos in this new blog! Can anyone help?) 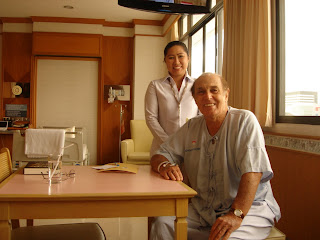 Oye had arranged a car and driver for me; so today I visited Maurice for lunch, where I met his friend,Derek, who apparently is an avid follower of my blog! Then off for a bit of shopping. The traffic in Bangkok is absolutely horrendous, what with six and seven lane roads teeming with every kind of vehicle, all trying to overtake everything else at breakneck speed, and helmetless motorcyclists zooming past you on both sides, it really is a wonder there aren’t more serious accidents here. When I lived in Thailand I used to drive myself – I couldn’t contemplate it now.
I’ve forgotten most of my Thai, (after all it was 40 years ago when I last lived here) but it surprised me just how much came back today when I needed to use it. Pom u tinee chua mong, chua mong krung, Tawin. Ma tinee murai pom taurasap. (I’ll be about an hour or so, Tawin. Come here when I telephone you). Thank goodness for mobile phones. Everyone has one here, so I could call the driver, Tawin, to pick me up. Dropping me outside the Emporium – one of Bangkok’s largest department stores, I browsed around for about an hour, and then couldn’t find my way out again! The Emporium has many entrances, and as every single sign is in Thai, I was totally lost. I soon discovered my Thai wasn’t good enough to ask directions, but eventually, after nearly half-an-hour of fruitless searching, I found a man in a suit who, after taking me to five of the exits, located the correct one – just in time to get back to have dinner with Maurice at the hospital.